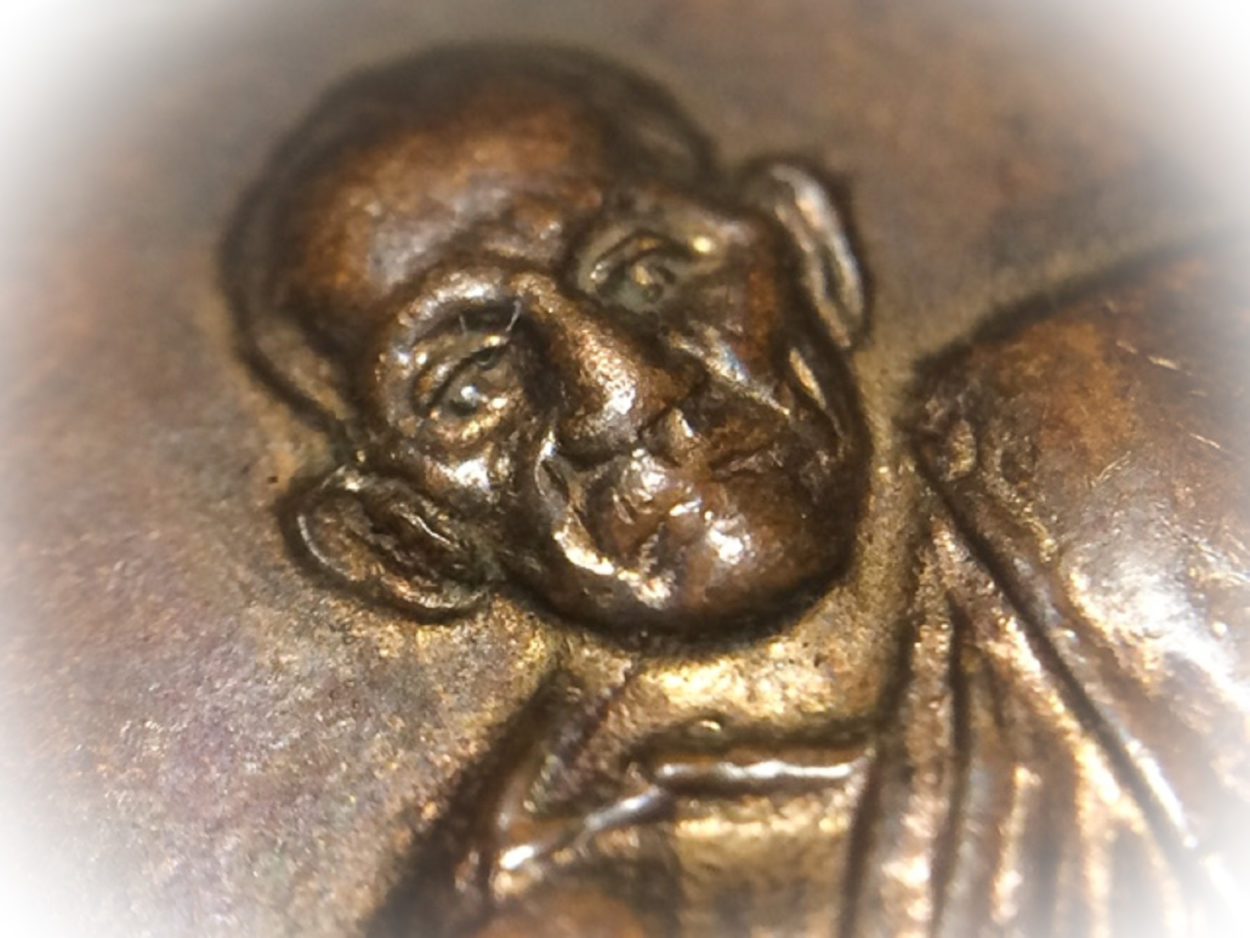 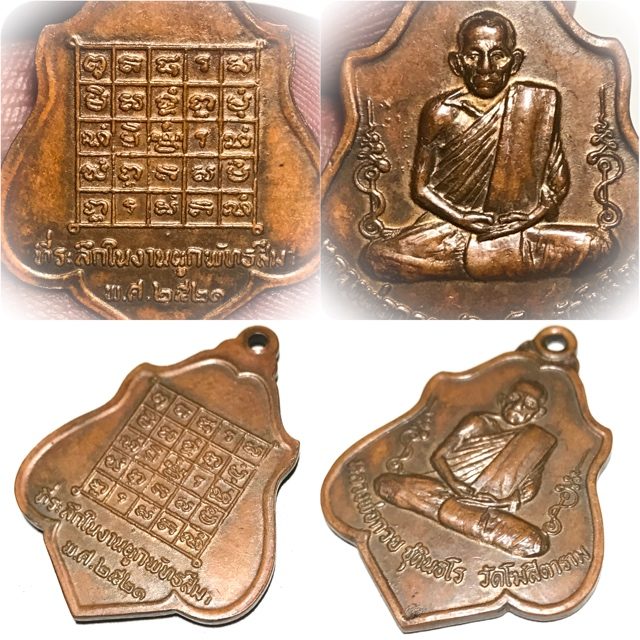 Luang Por Guay’s amulets have reached the highest level of respect and collectorship in their history now, and are considered to have noticeable effects that are felt be everybody who owns and wears one of his amulets. The stories of confirmation of their power are more than can be counted, and his Great Patipata and Exceedingly Powerful applied methods of Sorcery are a large part of what attributes to their power.

His amulets are now extremely rare to find because those who already own any will never wish to part with them again, and they are hence becoming one of the rarest kind of amulets to find these days. Usually this happens because of speculation by the collector scene, but in the case of Luang Por Guay’s amulets, it has happened primarily for their Sacred Value, much much more than for their collectorship and artistic value, which is of course also extremely high.

Luang Por Guay was the 6th abbot of Wat Kositaram until his passing on the 12th April 2522 BE, and remains one of the most popular Sak Yant Thai Temple Tattoo Masters and Amulet Makers in living memory. After his ordination in July 2467 BE, he spent his first early years preaching to the devotees. He would often preach the Vessantara Jataka story of how the Buddha attained the perfection of generosity. 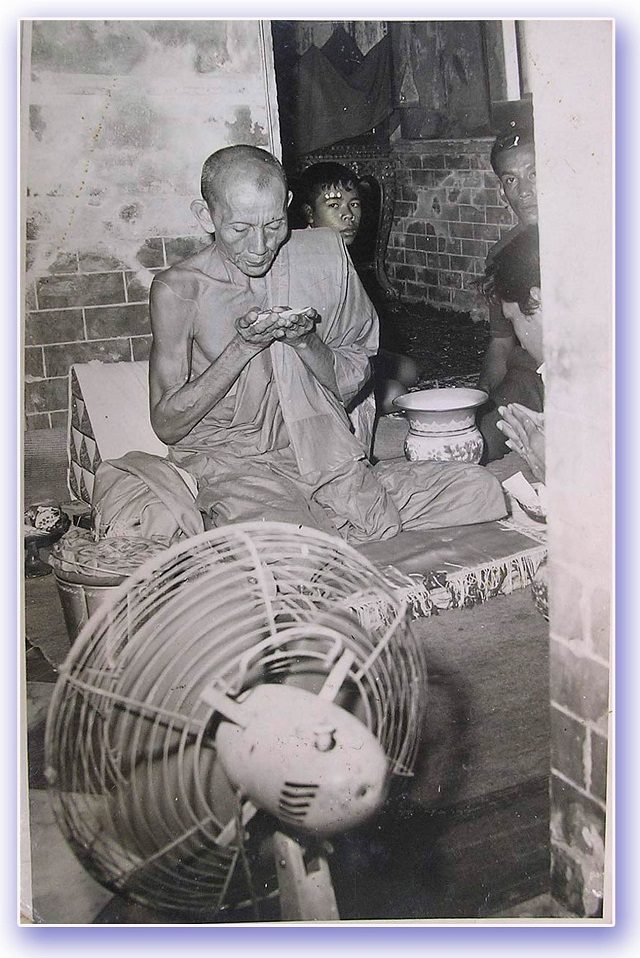 It was a very sad story and he always told it so well, that the devotees would not sit in the Sala hall to listen, rather sit outside it under the trees. Some would sit and cry because of the things he would preach. Most preachers of the Vessantara Jataka would use jokes and anecdotes to soften the seriosity of the story, but Luang Por Guay was not inclined to joke around, and would tell the story in a serious manner. After a time Luang Por Guay realised it was not his vocation to preach to people, and slipped away to focus on learning magical Wicha.

He began by studying the magical art of herbalism, for healing and medicinal treatments, as well as for making Magical Sacred Muan Sarn Powderswith the Great Hmor Khien. Hmor Khien was a spirit doctor who was able to prevent epidemics and cure ‘Roke Ha’ (Cholera). In that time there was a massive Cholera Epidemic and most of the other doctors and healers of the region had died from the epidemic, and only Hmor Khien was able to assist and heal the people. So Luang Por Guay of course was extremely interested to attain the knowledge and mastery of his Wicha.

Later in the year 2472, Luang Por Guay traveled to Wat Wankhorn to study the Pariyatti Dhamma (theoretical Dhamma) to improve his understanding of the path to enlightenment and in his own practice methods, as well as to understand the deeper meanings of the Buddha-Dhamma, and penetrate them. He learned under the Abbot Luang Phu Ma, but just before reaching his doctorate, Luang PorGuay became very ill and was not able to finish his exams. Luang Por Guay saw no need to get the official qualification papers, for he had indeed learned what he had learned with or without the certificate of doctorate, so he decided that was enough Dhamma theory, and that he would set out once more to seek Wicha, and to begin the practice of Vipassana Kammathana and Tudong.

Lp Guay then later traveled to learn Wicha with Luang Por Sri at Wat Pra Prang in Singhburi, who was a Great Kammatana Master of Vipassana at that time, and considered the most adept practitioner in Singhburi Province. It was here that Luang Por Guay learned the Wicha Tam Hwaen secrets of making magical rings, which indeed is the Wicha Hwaen of Luang Por Sri. Under the belly of the ring, would be the Khom Sanskrit Agkhara letters ‘I Dti’ embossed, which is of course the famous Hwaen Yant Idti. Luang Por Guay learned various other Wicha as he was practicing under Luang Por Sri.

In continuation, Luang Por traveled on to Wat Nong Ta Gaew in Supanburi, where he planted a Dton Samor ‘Anchor Tree’ (Terminalia bellirica). It is told that the Great Luang Por Saman once went to stay at Wat Nong Dta Gaew, and took a cockerel and placed it in Luang Por Guays tree (chickens sleep in trees). Apparently, the Cockerel refused to sleep all night in this tree. Nobody knows what kind of Wicha Luang Por Guay placed into the tree, but for a Cockerel to refuse to sleep when it is sitting in its most natural sleeping habitat, reveals that there was something unnatural about Luang Por Guays tree.

The discovery of the Dtamra Grimoire;

Luang Por Guay made friends with a monk at Ban Bang Nam Pra temple called Lp Jaem. One day, Pra Jaem found an ancient black parchment grimoire (‘Samut Khoi’) in the wilderness. But he was not able to bring the book, because it had some kind of protective spell or Deity watching over it, and merely told the story to Luang Por Guay. So Pra Jaem invited Luang Por Guay to come and have a look to see with his own eyes. When the two monks arrived back at the location where the book was hidden beneath the tree stump, Luang Por Guay saw that Pra Jaem had told the truth, the Grimoire was indeed there.

There were signs of someone having brought flowers, incense and candles to make Bucha with to the Grimoire and placed them beneath the tree stump. So Luang Por Guay lit the candles and the incense, and prayed; “If the Devas who protect this book wish me to take it and preserve the Wicha, then let this incense stick burn out completely”. But the incense stick did not burn completely, so Luang por Guay began to pray out loud again, and this time spoke the words; “If you let me take the Dtamra with me, I promise I shall only use it for the benefit of the temple and help all Sentient Beings”.

This time, all three of the incense sticks burned completely to the ground. Luang Por then performed ‘Gruad Nam’ (the pouring of water to dedicate the fruits of ones merits to the dead – a story covered in Buddha Magic Issue 3), and dedicated the fruits of his merits to the Master of this Dtamra he had discovered, and the Deities who protected it. He then performed the ceremony to invite the Grimoire to come with him to the temple.

There was a story circulating after this, that someone once took the Dtamra home with them and put it in their room, but the household experienced much disaster, sickness and even death, so the person had taken it and placed it under the tree stump.

When he heard the story, Luang Por Guay opened the book and began to read it, and he found a passage which mentioned that it was forbidden to take into anybod’ys house at all, if not, there would be great loss and misfortune. Luang Por Guay then began to learn the various Yant and Wicha, memorizing and practicing the magic spells within the ancient Grimoire.

This is where he got a great deal of his powerful Wicha from. The Grimoire is still there at the temple. The cover says ‘Kroo Raeng’ in red on it.

Few people have been lucky enough to open this Dtamra, but It was written from someone who has opened it, that the Grimoire contains hundreds of Yant and magic Kata. One extremely powerful Kata within the Grimoire is the “Pra Pra Putta Jao Chana Marn” (Mantra of the Buddha Conquering Mara), which is a spell so powerful that it is forbidden for a layperson to recite. This Montr Kata has both ways to perform white magic and also harmful black magic. 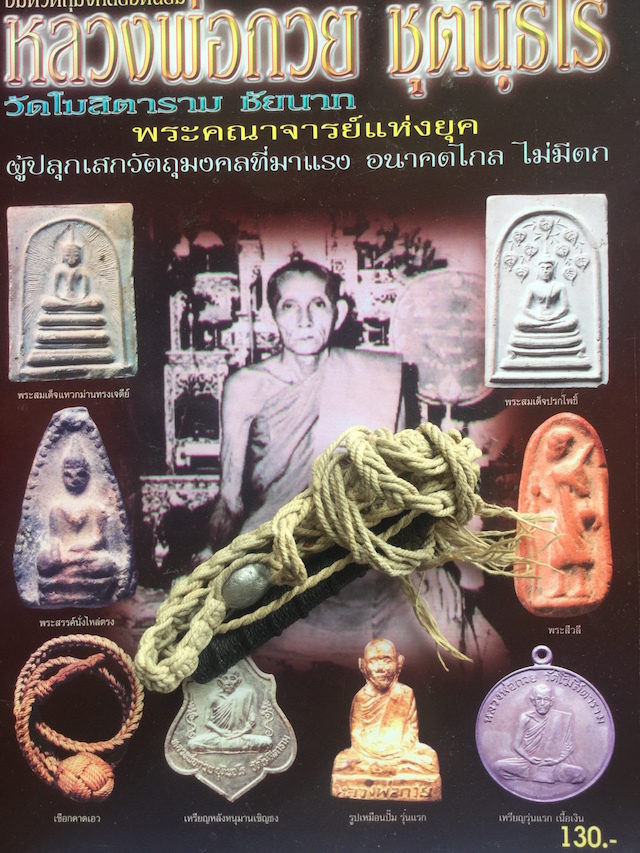 Encyclopaedic work on the life and amulets of LP Guay

Luang Por Guay passed away, on the 12 April 2522 at the age of 75 years old. He passed on in peaceful recline. The year before he died, he fell ill, and was carried to Paya Tai hospital for examination. The examining Doctor concluded that Luang Por Guay was suffering from food deficiency since over 30 years, and gave him some protein supplements for a period of a whole month, which turned out to still not be enough for his physical needs.

But when Luang Por returned to the temple, he continued his habit of eating only one meal a day without paying attention to the warnings. It seemed that since his return from hospital though, that his casting of magic spells and empowerment of amulets had become even more effervescent and intense. He seemed very strong physically as far as outside appearances went. In the year 2522, Luang Por wrote down two notes in his calendar;

As the 11th came nearer, Luang Por Guay fell ill, but it was not possible to detect any fever or recognizable illness – he could not eat, and would even spit his rice out and refuse any more, instead grabbing a piece of Tagrud and inscribing spells. In the night he would hold the Sai Sincana cord and empower amulets. He would inscribe lottery numbers on the palm of his hand, and sometimes show to Looksit with Choke Lap who came to pay last respects. As the tenth arrived, everybody came to await his passing, but on the 11th he was still alive.

Some of the temple committee suggested that his Kuti was full of magic and even images of the Kroo, perhaps no Deities could enter to take him. So they moved Luang Por Guay to the chanting room, where he opened his eyes in farewell for the last time, placed his hands together, and then, something amazing happened; The temple bell fell down from where it was hanging, and crashed to the floor ringing out loud with a resounding echo. The Looksit then realised that Luang Por Guay had passed on in this moment, and tuned to look at the time. It was exactly 7:55 am on the 12th April.

The 12th of April every year is the date for paying reverence to Luang Por Guay at Wat Kositaram, where Looksit gather each year to pray to Luang Por Guay and ask for his blessings to continue to protect them and improve their lives.

Make a wish and continue with;